You will be surprised at the immense connectivity of the Savya Financial Center from Metro Manila’s key destinations. Its prime location is synonymous to having your home just next to your office. The site is also located near the government’s new infrastructure project, the Southeast Intermodal Transport System (ITS)- a 5.57-hectare transportation hub where more than 4,000 buses ply different routes to and from various destinations in Metro Manila and the adjoining provinces (like Cavite, Laguna, and Quezon to the south and Bulacan, Tarlac, Pampanga, and other northern provinces).

What would you expect in a premier property that is the Savya Financial Center? There are lots of reasons, indeed! For one, the Arca South is expected to compete with the BGC and even Makati as the next big thing in Metro Manila in terms of entertainment, leisure, and shopping, financing, and other commercial activities.

Recent studies show that more than 200,000 commuters per day pass-by, while some are going to Arca South via the ITS. If you will buy or lease a unit at the Savya, expect a natural ambiance typical of your home in a corporate setting. Your office will not be only energy efficient and different from other conventional offices in the metro, you got to have an environment so conducive for growth where there are residential developments nearby, the best estate practices, green spaces, diverse retail options, and an intermodal transport system right at your doorstep.

Furthermore, in the near future, your access to other of Metro Manila’s CBDs will be made quickly as the government various infra projects (such as the linking of C5 and C6 highways) will make your everyday trip a lot easier. 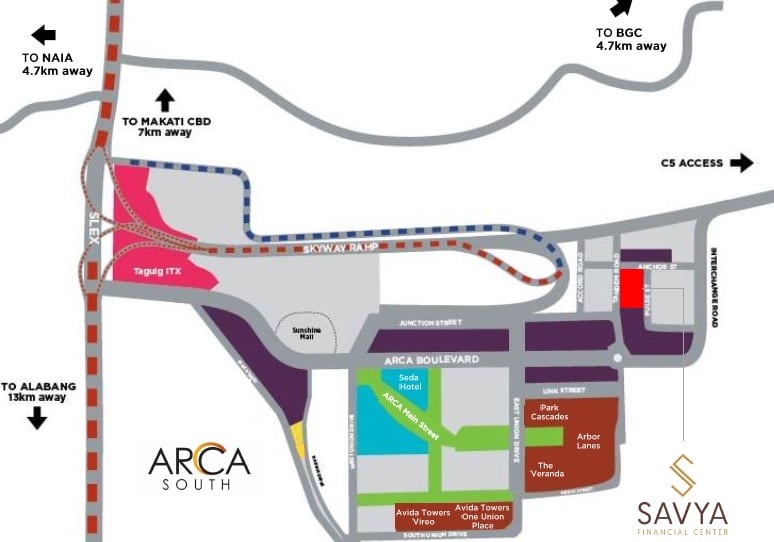